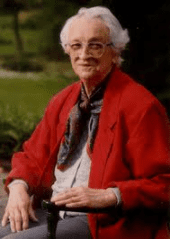 Hildegard Peplau was born in 1909 in Pennsylvania. As a child, she saw the devastating effects of the flu epidemic in 1918, which greatly influenced how she understood how illness and death impacted families.

She graduated from the Pottstown, Pennsylvania School of Nursing in 1931 and worked as a staff nurse in Pennsylvania and New York City. After a summer position led to Peplau being recommended to work as a school nurse at Bennington College in Vermont, she earned her Bachelor’s Degree in Interpersonal Psychology in 1943. She earned her Master’s and Doctoral degrees from Teacher’s College, Columbia University, and was certified in psychoanalysis at the William Alanson White Institution of New York City.

After earning her Bachelor’s Degree, Peplau studied psychological issues at Chestnut Lodge, a private psychiatric facility, with Erich Fromm, Frieda Fromm-Reichmann, and Harry Stack Sullivan. This led to Peplau’s life long work, which extended Sullivan’s interpersonal theory to be used in the nursing field. From 1943 to 1945 Peplau served as an Army Corps Nurse. Being stationed at the 312th Field Station Hospital in England allowed her the opportunity to work with leading figures in American and British psychiatry.

In the early 1950s, she created and taught the first classes for graduate nursing students at Teachers College. She was a member of the faculty of the College of Nursing at Rutgers University between 1954 and 1974, where she created the first graduate program for clinical specialists in psychiatric nursing. In the 1950s and 1960s, she offered summer workshops for nurses across the United States where she taught interpersonal concepts and interviewing techniques, as well as individual, family, and group therapy.

After retiring from her position at Rutgers, Peplau helped create the first European graduate nursing program at the University of Leuven in Belgium, where she was a visiting professor in 1975 and 1976.

Some of Hildegard Peplau’s works include:

For those who become nurses to work with people, studying Hildegard Peplau’s model of nursing can be very useful. By better understanding the seven roles of nursing, they can apply different roles in different situations, which will ensure that their patients receive the best care possible, and will ultimately speed along treatment and recovery.